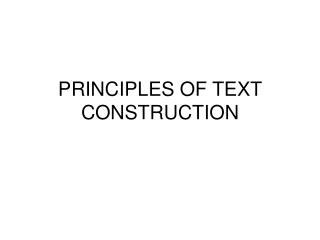 PRINCIPLES OF TEXT CONSTRUCTION. De Beaugrande and Dressler (1981) define the Text as a “communicative occurrence which meets seven standard of textuality. If any of these standards is not considered to have been satisfied, the text will not be communicative”. Text Features - . “once you learn to read, you will be forever free.” - frederick douglass. what are text features?.

Scaffold Safety for Construction - . scope and application of the regulation. regulations on scaffolds in the

Understanding Text Structures - . what is a text structure?. a “structure” is a building or framework “text

Principles of Visual Design LCC 2720 Instructor: Brian Schrank Intro to Typography - . typography is the design of

Aristotle and Dramatic Construction - . because aristotle saw poetry and drama as means to an end (for example, an