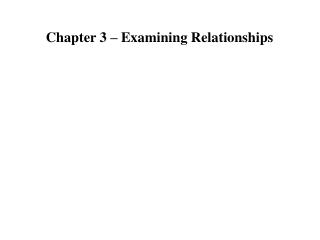 Chapter 17 Object-Oriented Design - . chapter goals. to learn about the software life cycle to learn how to discover new

Periodic Relationships Among the Elements - . chapter 8. periodic table - in the beginning. 1. a necessary prerequisite

CHAPTER 3 - . principles of money-time relationships. money. medium of exchange -- means of payment for goods or

Vertebrate Relationships and Structure - . chapter 2. what is a vertebrate. classification kingdom: animalia

Chapter 12 - . dealing with employee-management issues and relationships cps questions. 1. as suggested by business

CHAPTER 16 - . system design. chapter goals. to learn about the software life cycle to learn how to discover new classes

CHAPTER 8 - . managing an on-premise laundry objective : examining how to manage a laundry within the hotel.

From Research to Practice Examining Gender Differences to Increase Success for All - . presentation to the american