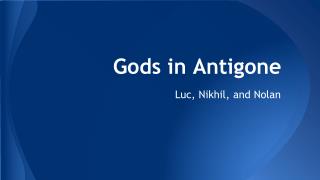 Gods in Antigone. Luc, Nikhil, and Nolan. Gods and Goddesses. Tertiary heavenly descendents: Gaia → Titans → Gods/Goddesses Greeks at the time saw the Gods as embodiments of feelings or thoughts; they thought that the Gods existed in a parallel to themselves. Sophocles. ANTIGONE: - . a woman willing to sacrifice it all for her beliefs. according to seven against thebes. eteocles and

Antigone - . comprehension questions/ study guide. prologue. 1. what information does antigone give to ismene at the

Antigone - . oedipus’ crazy daughter. adjective: lucky. auspicious. we took the rainbow to be an auspicious sign that

Antigone - . by sophocles. greek drama. greek drama was performed at annual festivals in honor of dionysos – the

Antigone - . by sophocles. guiding questions. how does greek drama compare to our modern theater? how do the themes in

Antigone - . the story behind the story. the myth of oedipus. laius (king of thebes) and jocasta (queen) conceive a

Antigone - . english 9(1). activator. think of a time when you believed that you were right about a situation. what was

ANTIGONE - . sophocles. he was educated with great care, according to the old greek system, in which music, dancing, and

Antigone - . everything you need to know to get started. history of greek theater . theater in the western world can be

Antigone - . the structure of greek tragedies. greek dramas follow a formula:. the prologue: the opening scene that sets

Antigone - . speaking truth to power. thoughts…. &quot;what harms the victim most is not the cruelty of the

Allusions in Stasimon 4 of Antigone - . danae. danae was imprisoned when it was foretold that she would mother a son who