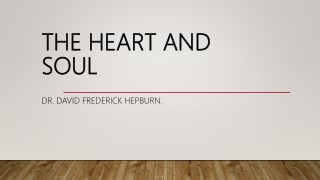 Heart and Soul - . &quot;for god so loved the world that he gave his one and only son, that whoever believes in him

Heart Transplant - Learn all about heart transplant procedure, recovery, cost and question & answer. find out what is

One Heart and One Soul - . old testament. consider hezekiah’s reforms: “the hand of god was also on judah to give

The Heart Dr. Isazadehfar - . location of the heart. the heart is located between the lungs behind the sternum and

The heart and heart disease - . 5.2 the cardiac cycle. learning outcomes. students should understand the following: