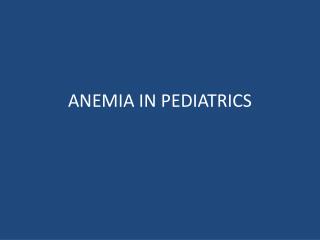 ANEMIA IN PEDIATRICS. Anaemia is defined as a low Hb concentration in blood, or less often, as a low haematocrit, the percentage of blood volume that consists of red blood cells. The Hb and Ht range for assessing iron deficiency are: Hb (g/ d L) Ht (%) Children 6 months - 5 years 11 33 Pediatrics and Research BOARD REVIEW - . question. on examination, a 3-month-old girl still has a moro reflex, asymmetric

CLASSIFICATION OF ANEMIAS - . what is anemia, how do you diagnose anemia, and how are the different anemias classified?.

Anemia in Pregnancy - . o+g update 2014 hospital sarikei. what is anemia. disorder by which the body is depleted of rbc