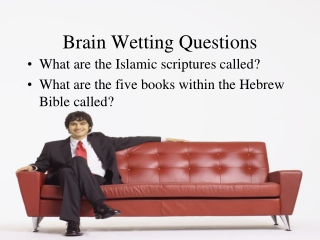 Brain Wetting Questions. What are the Islamic scriptures called? What are the five books within the Hebrew Bible called?. Our Objectives:. To demonstrate an understanding of the significance of studying other religions – Islam To identify misconceptions that are found regarding Muslims Wetting and Soiling - . consider abuse if a child;. has secondary day or night wetting not responding to treatment is

Bed Wetting: What causes it? - This presentation will tell you about the reasons beside bedwetting. how it

Effects of Bed Wetting on Your Child - Bed wetting is also known as nocturnal enuresis, which is just a part of growing

Causes And Treatment Of Bed Wetting - With the right treatment and exercise, one can treat the problem of bed-wetting or

Start the Cleaning by Wetting the Carpet - If you fill the shampoo in the machine and start using it, there will be a lot

Verified 300-070 Questions - 300-070 Brain Dumps RealExamDumps.us - If you are looking for a material that assures you of