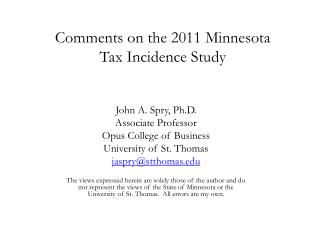 Tax Incidence Extensions - Three rules of tax incidence. the statutory burden of a tax does not describe who really bears

Tax on clothing in Minnesota - . by: kayla palm. should a tax be put on to clothing in minnesota?. minnesota is one of

Tax Incidence in Thailand - The questions. who bears the burden of taxes?who benefits from government spending?what are

Comments on The Future of the Foreign Tax Credit - 2. a badly flawed debate. international tax policy debate is

COMMENTS ON REVIEW OF TAX ADMINISTRATIVE PROCEDURES - . summary of results of review of tax aps the tax working group.

Tax Incidence and Deadweight Loss - . excise taxes. tax charged on each unit of a good or service that is sold most

Residential Status and tax incidence - . the following norms are necessary for deciding the residential status 1)

Residential Status and Tax Incidence - . residential status is not the same as citizenship income may be earned outside