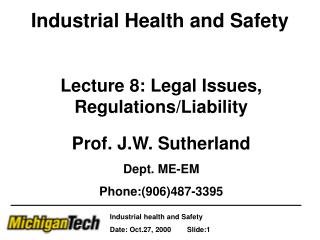 Health and Safety - . by today, health and safety is a most important subject in every institution and across every

Health and safety - . at. you must know. how to get a first-aider how to report an accident evacuation procedures your

HEALTH AND SAFETY - . for rotary district 1220 and its member clubs. health and safety. oh no!. tony petitt ba ceng