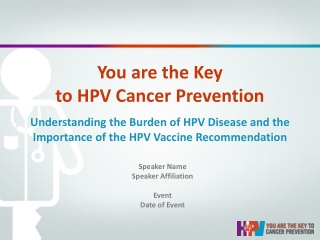 You are the Key to HPV Cancer Prevention Understanding the Burden of HPV Disease and the Importance of the HPV Vaccine Recommendation. Speaker Name Speaker Affiliation Event Date of Event. Objectives. Event Date Speaker - . dfi who we are. main objective stated in the national film act: to promote film art and film

First Name Last Name Event Name Date of Event - . overview. when: launched in september 2008 why: because too many

Speaker name, Title Date of presentation - . commodities are used by everyone, everyday. an average 200kg of copper in a

NAME OF SPEAKER - . title of the seminar. date – time // room. photo. short biography of the