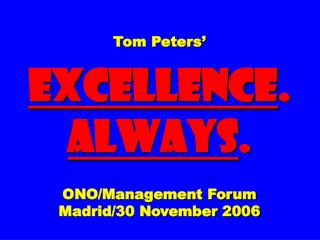 29 November 2006 - Fda advisory committee meeting. 29 november 2006. celecoxib in the treatment of the signs and symptoms

Excellence: The 12H “Theory of Everything” BNZ /A CONVERSATION WITH TOM PETERS - Note : to appreciate this