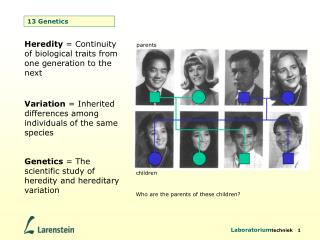 13 Genetics. parents. children. Who are the parents of these children?. Heredity = Continuity of biological traits from one generation to the next. Variation = Inherited differences among individuals of the same species. Genetics = The scientific study of heredity and hereditary variation. Lab 13: Association Genetics - . goals. use a mixed model to determine genetic associations. understand the effect of

Ch 13 Genetics and Biotechnology - . sc.912.l.16.10. evaluate the impact of biotechnology on the individual, society

Frontiers of Genetics Ch. 13 - . ms. levensailor. biotechnology: the use of organisms to perform practical tasks for

Genetics - . probability and punnet squares. objectives. by the end of class you will know: how to indicate the

GENETICS - . unit 7. allele. how we inherit our genes each human offspring inherits one maternal set of 23 chromosomes

Genetics - . genetics. what is genetics ? study of inherited traits what is heredity ? passing of traits from

GENETICS - . 1. gregor mendel. genetics =the branch of biology that deals with heredity . a great deal of what we know