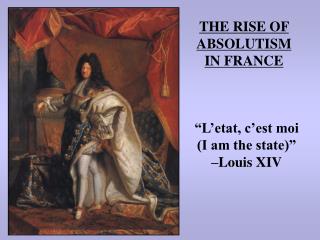 Crisis and Absolutism in Europe 1550-1715 - . monarchy. a system of governing through heredity leadership, headed by a

My Tour of France - . this is a collection of photos from my experience of the 2007 le tour de france. the article from

Age of Absolutism Ms. McKenna Thanks to Ms. Stewart

Age of Absolutism - . absolutism. a system in which the ruler, usually a monarch , holds absolute power (complete

The Age of Absolutism - . when kings and queens had absolute power!. what does “absolute” mean?. something that does

The Age of Absolutism - . spain and france sections 1 and 2. trivia. in 1900 there were still quite a few absolute

What will we learn today? 10.4.1 The rise of industrial economies and their link to imperialism. - Unit 4: imperialism.

Absolutism and Constitutionalism in Western Europe 1589-1715 - . what is going on during this time around the world?.