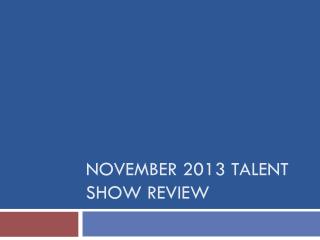 CSES Talent Show - . if mrs. porter does not receive the signed permission slip at the bottom of this form by wednesday,

The Talent Show - . vocabulary. gym. large indoor room used for sports or exercise. perform. put on show for other

Third Grade Talent Show - . it’s that time of year again! our third grade is having their annual talent show. the

TALENT KICKOFF 2013 - . the journey. where to go from here. ‘would you tell me, please, which way i ought to go from

The show- review - . by josh porter back-stage team. act one- cheerleaders. no equipment was needed for this act, however