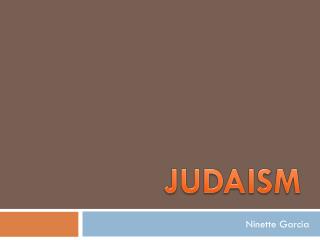 JUDAISM. Ninette Garcia. BACKGROUND INFO. Believe in one God, or monotheistic Judaism traces its heritage to the covenant God made with Abraham and his lineage — that God would make them a sacred people and give them a holy land David Garcia - . highlights. arra. of the $10 billion appropriated directly to nih* approximately $6.3b has been awarded

YESENIA GARCIA - . welcome to my world !. about me. i’m 18 years old. i was born in lindsay. i am the youngest out of

S. Diana Garcia - Seizures . s. diana garcia . what is a seizure?. a seizure is a manifestation of abnormal