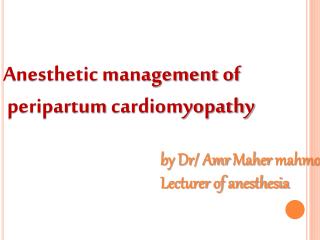 Anesthetic management of peripartum cardiomyopathy. by Dr/ Amr Maher mahmoud . Lecturer of anesthesia. It is a form of heart failure affecting females in their last months of pregnancy or early puerperium . (1) . The role of anesthesiologist is important in the peri -