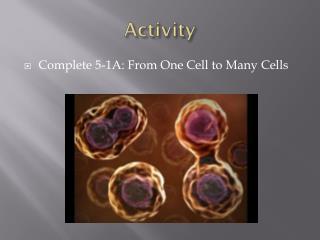 Activity. Complete 5-1A: From One Cell to Many Cells. Cell Cycle. Divided into three stages Interphase Mitosis Cytokinesis. Interphase. Longest stage of the cell cycle Carries out its functions Example: stomach cells are making enzymes needed to digest food 3 phases Activity: Entrance Activity - . read and complete the anticipation guide provided to you. math and science literacy

ACTIVITY - To be heart healthy. eat healthy. exercise for 30 minutes most days of the week. quit ... search for

Activity - . without checking the text how many functions can you identify by linking each one with the following clues

Activity - . while you are waiting for us to begin, please complete the question on the

Activity - . describe yourself in three sentences. people are all different we want different things we are attracted to

ACTIVITY - . activity coefficients. no direct way to measure the effect of a single ion in solution (charge balance) mean

Activity - . introduction 1.) hydration ions do not act as independent particles in solvent (water) surrounded by a shell

Activity - . once upon a time there was a math

Activity - . stand up put your hands on your hips do 2 small jumps turn around 2 times say hello to your neighbor sit

Activity - You have one minute to create as large of a paper chain as you can. we will record your production (how much

Activity - . in your group, you will be given a card. you will be using a bubble map to describe the shape. in the middle