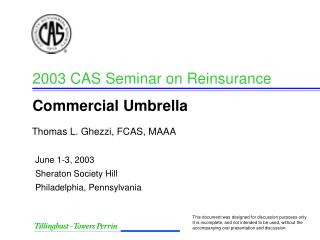 2003 CAS Seminar on Reinsurance. Commercial Umbrella. June 1-3, 2003 Sheraton Society Hill Philadelphia, Pennsylvania. This document was designed for discussion purposes only. It is incomplete, and not intended to be used, without the accompanying oral presentation and discussion. CAS Seminar on Valuation - . mergers, acquisitions, and actuaries: do we have the right stuff?. presenters. bill wilt,