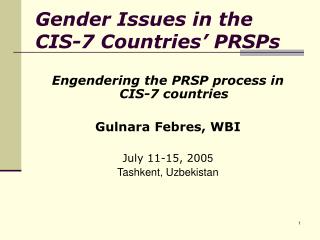 Gender Issues in the Practice of Psychology - . by: hannah harris and sarah shadi. key terms. sex “either the male or

Gender Issues - . chapter 5. “ ….genetic variation is essential in all species. instead of regarding variants in

The Development of Gender Indicators in the Arab Countries - . central administration of statistics lebanon istanbul 1-3