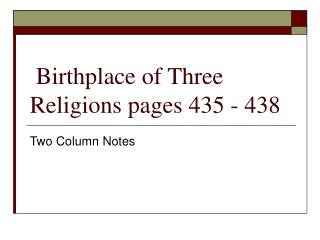 BIRTHPLACE OF THREE RELIGIONS - . judaism -christianity -islam. origins of judaism?. according to the jewish faith

Birthplace of Three Religions - . three of the world's religions-- judaism, christianity, and islam have their roots in

Three Religions - . christianity islam hindu. christianity. one god who has one son, jesus christ those who practice it

Three Major Monotheistic Religions - Judaism: the facts. judaism is the oldest of the three monotheistic religionsfounded

Three Monotheistic Religions of the Middle East - . geo engage: 2/14. where have these 3 religions developed the most?

Module Three Session 1 Religions of Yunnan Nationalities - . what is religion. religion is a set of beliefs and patterned

Birthplace of the Renaissance - . renaissance. means “rebirth” and refers to the revival of art and learning