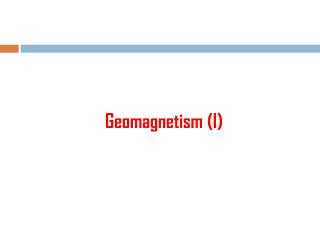 Geomagnetism (I). The Earth’s magnetic field. Magnetic field of the Earth measured at the surface comes from three sources: Geomagnetism: Lecture 1 - . this lecture is based largely on: http://www.earthsci.unimelb.edu.au/es304/. the coulomb

Introduction to Geomagnetism - . the magnetic record of earth's history that is frozen into crustal rocks has provided,

Pourquoi-Pas and Geomagnetism - In iceland and the surrounding ocean, much geomagnetic data was collected by ... iceland

Geomagnetism 3: The use of geomagnetism to infer past plate motion - . recommended reading: the solid earth by c.m.r.

Geomagnetism Part 1: Basic Principles and Material Properties - . magnetism like a lot of phenomena in physics,

GEOMAGNETISM: a dynamo at the centre of the Earth - . lecture 3 interpreting the observations. overview. historical and

GEOMAGNETISM: a dynamo at the centre of the Earth - . lecture 4 thermal core-mantle interaction. overview. lateral