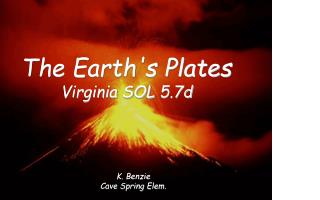 The Earth's Plates Virginia SOL 5.7d. K. Benzie Cave Spring Elem. The Earth's Plates. Plate tectonics is the theory that the Earth's crust is broken up into 12 major plates. These plates are slowly drifting on top of the mantle. The plates move both horizontally Fnft: The major plates of the earth's crusts - What does the bottom of the ocean look like? or what is the topography or

Virginia SOL Review - . geography sol vs.2 sol 4.10. sol vs.2 geography. click on the continent where virginia is

TEKS 5.7D - . identify fossils as evidence of past living organisms and the nature of the environments as the time using

Virginia Studies SOL Posters - . eastern woodland indians. why are the first americans called indians?. what were the

Virginia Studies SOL Review Posters - . reconstruction. what were some of the problems virginians faced during the period

The Earth's Moon - . the earth's moon, in many ways, is prototypical of a substantial fraction of the objects in the

The Earth's BIOMES - . the biosphere is made up of all parts of the earth that contains life. a geographic area with

Earth's Atmosphere - . thin gaseous envelope. figure 1.2. the atmosphere is a thin layer of air that protects the