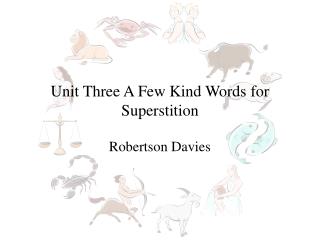 Unit Three A Few Kind Words for Superstition. Robertson Davies. Pre-reading Questions. 1: Give an example of superstition either handed down from one’s family tradition or arising from your own mind or from other sources, and explain the irrationality in it. Three of a Kind - . for this game, study the three items listed on the screen. what do they have in common?. burger. #1.

…a few words about myself - . 15 years of experience as a professional journalist and pr / m arketing consultant s

A few words about us - . “levenes employment provides 'outstanding' advice at a lower cost than city firms. audrey

A FEW WORDS ABOUT BOCHNIA - . bochnia – a city located in southern poland about 50 km from cracow and 30 km from

A Few Key Vocab Words - . that you should know! by dr. bowie. vocab words. human-computer interface : or hci “the

A few words on the CCOB @ LPSC The LPSC in few words: - . the scientific environment : grenoble 4 universities or

Superstition - . by cathy chang. article #1. black cats have a bad name in many countries, but nowhere more so than

Superstition - . and behaviourism. superstitions: beliefs not based on reason or knowledge. what’s yours?. b. f.

Introducing words: a few instructional strategies - . why? what? how? jen madison jmadison@esu6.org 12.15.09.

INSUP FORMATION IN A FEW WORDS… - . since its creation in 1978, insup formation has grown and developed into one of the