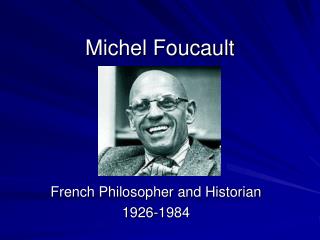 Michel Foucault. French Philosopher and Historian 1926-1984 . Biography. Born Paul-Michel Foucault in Poitiers, France on October 15, 1926 Father was a surgeon who hoped Michel would follow in his footsteps Michel Foucault - . foucault vs. marx. like marx, foucault interested in inequality, in the exercise of power – but he

Michel Foucault: Biopower - . biopower. the internalization of scientific concepts of health and normality which are

M. Foucault ‘Discipline and Punish: The Birth of the Prison’ - . part 4 - prison. introduction. previous theory on

Michel Foucault - . a brief overview. his work. his writings have had an enormous impact on other scholarly work:

Michel Foucault and the question of “What is Enlightenment?”

Michel Foucault - The Culture of the Self, First Lecture, Part 1 of 7