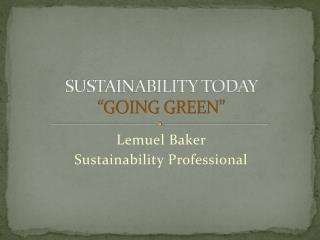 Stormwater Management: Making Sure Green Is Green - . critical link between land and water: two sides of the same coin.

Green Chemistry and its Role for Sustainability - Green chemistry education: a key to sustain the development of new ...

SOCIAL ENTERPRISE: THE NEW MODEL FOR CSR-vikasa - Bala vikasa is positioning itself as a key player in this new dynamic

Meat in a Green World - . an overview of sustainability and farming. welcome. use the following buttons to guide you