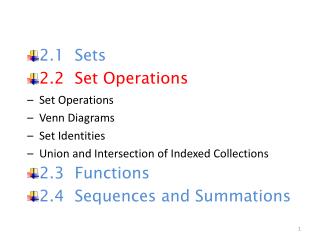 Chapter 12 Venn Diagrams - . venn diagrams are illustrations used in the branch of mathematics known as set theory . they

Venn Diagrams - . venn diagram. venn diagrams are used to represent relationships between sets. they can also be used to

Venn and Tree Diagrams in Probability - . b y daniel christie. probability. in a class of four brunettes, two blondes,

Sets - . a. b. lecture 1: sep 5. c. this lecture. we will first introduce some basic set theory before we do counting.