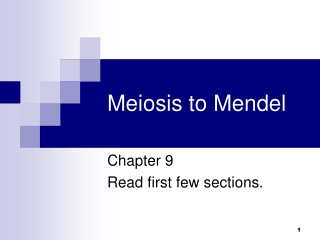 Mendel &amp; Meiosis - . chapter 6. mendelian genetics. what is this? branch of genetics that deals with simple

Mendel and Meiosis - . gregor mendel. heredity is the passing of characteristics from parents to offspring. genetics is

Meiosis and Mendel - . chapter 6.1-6.3. key concept gametes have half the number of chromosomes that body cells have. sex

Chapter 10 Mendel and Meiosis - . i. gregor mendel. a. mendel performed 1 st experiments in heredity. -the passing

Extensions to Mendel - . mendel was right…. but not for every situation…. going beyond mendel. so far you have