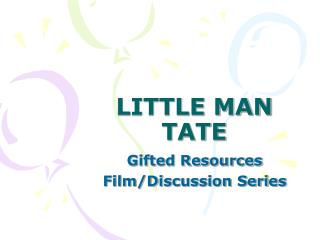 “Land of Little Sticks” -James Tate - . brandon wells. explication. where the wife is scouring the frying pan and the

The Little Man Computer - . the little man computer. w e will review the operations that the computer is capable of

Little Man With A Gun - . ladarrius richardson. there was a little man with a little gun. and his bullets were made with

CHAPTER 6: The Little Man Computer - . the architecture of computer hardware and systems software: an information

Brent Tate - . play for the new zealand warriors. tate and nz warrior sponsors. the sponsors and jersey. team mates. some

Tate Brand - . http://www.wolffolins.com/tate.php. b&amp;q has teamed up with the art gallery group tate to launch an