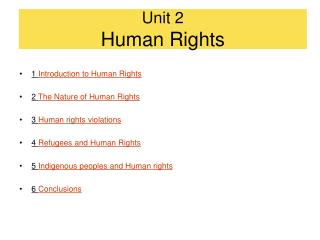 Human Geography Unit 2 - . a branch of geography that focuses on the study of patterns and processes that shape human

Unit 2 Civil-Rights Heroes - . text a the freedom givers text b the dream, the stars and dr. king. text a: the freedom

Unit 2: Civil Rights Heroes - . the song you are going to listen to is called abraham, martin &amp; john , sung by

Human Rights - . “god is concerned with poverty and oppression, as both are insults to his intentions for humanity”.

Human Rights - . a brief introduction. what are human rights. they are a set of principles agreed by the members of the

Human Rights - . the modern conception of human rights developed in the aftermath of wwii, in part as a response to the

HUMAN RIGHTS - . what are human rights

HUMAN RIGHTS - . human rights - definition:. “inalienable and inviolable rights of all members of the human