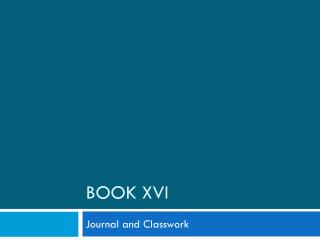 Book XVI. Journal and Classwork. Book XVI: Journal. You have 10 minutes to write about the following prompt: Imagine that you are Penelope or Telemakhus . What would you say to your husband/father who has been gone for 20 years? If you were Odysseus how would you explain your absence?. Book XVI - . mike strohlein. setting and characters. setting- eumaeus ’ hut eumaeus is a swineheard who lives nearby to