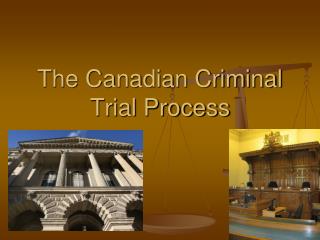 The Canadian Criminal Trial Process. The Key Individuals in Court. There are two fundamental principles of Canada’s criminal justice system : An accused person is innocent until proven guilty. Guilt must be proven beyond a reasonable doubt. THE CRIMINAL TRIAL PROCESS - . the criminal trial is an adversarial process (when 2 or more opposing sides present their

The Criminal Trial Process - . the charter . section 11(d) of the charter of rights and freedoms states that a person

The Criminal Trial Process - . a criminal trial. … is an adversarial process that pits the crown against the accused.

THE CRIMINAL TRIAL PROCESS - . legal principles in the criminal justice system. the burden of proof – the crown must

Canadian Criminal Pardon Application Process - We are a criminal record removal service and a resource to over 5,400

Criminal Justice Process: Proceedings Before Trial - . bail and pretrial release. bail- assure the court that the

The Trial Process - . what is a trial?. search for the truth? to bring the competing sides to a peaceful conclusion and

THE TRIAL PROCESS - . chapter 3. chapter issues. nature of a lawsuit factors involved in litigation procedures and