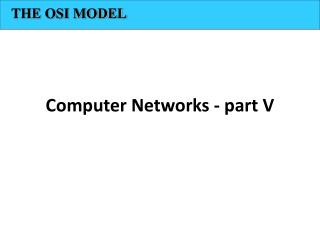 THE OSI MODEL. Computer Networks - part V. LAYERED TASKS. There are 3 different activities at the sender site and 3 at the receiver site. Must be done in the order of the layers. Each layer at the sending site uses the services of the layer right below it. Computer Networks (EENG 4810) - . course objectives &amp; scope. in this class, you are expected to learn -. a brief

Introduction to Networks - . use networked computers to: create or download catalog records for our holdings create and