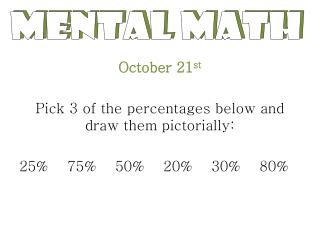 The Middle and Lower Course of a River - . starter: draw a simple diagram of the river cross section at the following

How to Draw a Name in 2 Point Perspective by Kathy Barclay - . the rectangle below represents your drawing paper. the

HOW TO DRAW TEXAS - . x. it’s easy to draw the state of texas if you think in terms of proportions . first, draw the

AP Biology - . room g03, ms. babbey turn in your summer assignment. pick up a list of root words, quiz on friday. be

ELA Teacher Leadership Network - . october 26, 2011. welcome ! while you are waiting:. enjoy breakfast pick up your

How to draw proportional circles - . you need: a map with the four zones marked onto it. compass, pencil, ruler.

The Internal Assessment - . internal assessment. the biggest levers you’ve got to change a company are strategy,

Jump Start: October 5, 2009 - . draw a conclusion from the following statements. if it is raining, the temperature is

Pick the low-hanging fruit first -- nothing succeeds like success! - . keep your eye on the ball -- don’t let the best

The Urban Game - . 1700. draw a river across the page draw a wooden bridge over the river draw 4 roads originating from

A Cautionary Study: Unwarranted Interpretations of the Draw-A-Person Test - . professional psychology: research and

11 th Grade TAKS - Released Tests - by Objective - . objective 1: the student will describe functional relationships in a