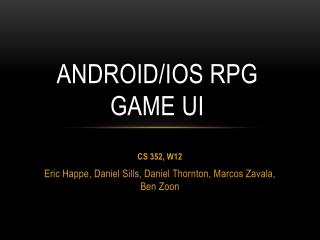 Android or iOS - This presentation is about comparing the two leading operating systems android, ios in

Genre: Role Playing Game (RPG) - . what is an rpg?. role playing games have several key characteristics: player gets to

Android Game Development - . 2d physics. base project. download our base project and open it in netbeans cg.iit.bme.hu/

ANDROID UI – FRAGMENTS - . fragment. an activity is a container for views when you have a larger screen device than a

Mobile Action RPG Game for iOS and Android - Guardian Light - Guardian light of the world (glow) the commandments, is an

iOS vs Android game development - When it comes to choosing a smartphone, one generally has to choose between mobile

Android Game Development - Share your concept and we promise to plan an outstanding version for you. our app game