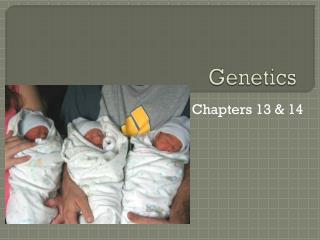 Genetics. Chapters 13 & 14. Genes are segments on the chromosomes that are responsible for inherited traits such as eye color, hair color, skin color, height, etc. Now we’re going to learn how these traits are in- herited by the study of genetics.

Genetics - . genetics. what is genetics ?. genetics is the study of heredity and variation examples of genetic variation.

Mendelian Genetics - . the father of genetics. gregor mendel a monk that worked with pea genetics. purple vs. white -

GENETICS - . why do you look like that?!?. a little background…. gregor mendel- “father of genetics” austrian monk

Genetics - . a. heredity is the passing on of characteristics from parents to offspring. * genetics - science of

Genetics and Development - . embryology &amp; genetics. how did the work of boveri and stevens support the

Intro. Genetics - . genetics. the scientific study of heredity that involves how genes are passed from parent to

Molecular Genetics Genetics, GEN 301 - . genetics molecular. a a. abugabal. gen 301. the aims of the course . acquire the