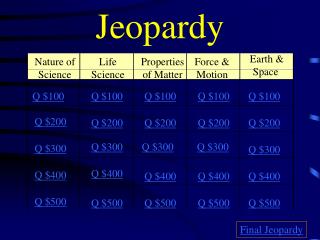 AUGC Double Geo-Jeopardy! - . to final geo-jeopardy!. this golden semiprecious stone is commonly found along the shores

Welcome to 5 th Grade Jeopardy!! - . by caroline lamagna. jeopardy – round 1. click here for round two. j.k. rowling is

Jeopardy Rules - . teams: raise your hand to be called upon. each team takes turns, alternating between teams. the same

Welcome - . to. jeopardy!. final jeopardy. round 1. round 2. team one. team two. team three. conservation and natural

Jeopardy - Choose a category. you will be given the answer. you must give the correct question. click to begin. choose a