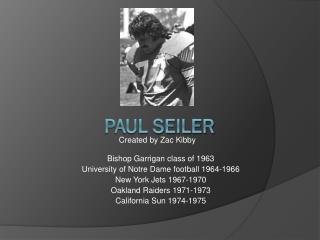 Rocco Seiler - Middle School Principal - Rocco seiler has demonstrated his ability to lead and inspire in many ways. he's

Mississippi’s Geologic Past at the Dunn-Seiler Museum - . pre-cambrian through silurian 4.6 billion years to 416

Paul - . activity 1. paul said . “ i started going back into lessons ‘ cos i found i needed ( qualifications) to get

Paul - . activity 1a. questions for discussion. 1 think of examples where paul could demonstrate : personal commitment