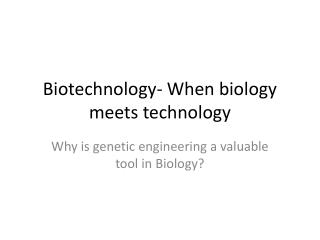 Biotechnology- When biology meets technology. Why is genetic engineering a valuable tool in Biology?. What is biotechnology?. Application of biological techniques to manipulate DNA to benefit humans Biotechnology has impacted the fields of forensics, medicine, and agriculture. Biology Meets Math - . measuring a forest. us department of homeland security. goals be able to describe the area and

When Einstein meets Buddha - . by yoon tiem leong, school of physics, usm talk given to buddhist society, at dkg, usm, 5

When Yoga Meets Ayurveda - On this international yoga day, 2017 which is being celebrated on 21st june, worldwide, we at

WHEN EAST MEETS WEST - . jovina vang’s tok presentation. what are the problems of knowledge when it comes to