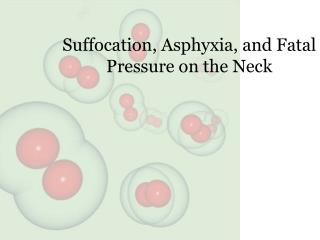 Suffocation, Asphyxia, and Fatal Pressure on the Neck Suffocation, Asphyxia, and Fatal Pressure on the Neck. The Nature of Asphyxia. asphyxia - absence of pulsation. The true meaning of the term is best described as pressure on the neck associated with cardiac arrest. The long and short of it is that a lack of oxygen leads to cell death.

Suffocation, Asphyxia, and Fatal Pressure on the Neck

Oxygen Transport and Asphyxia - . ans 536 spring 2014. goals. to transport oxygen from maternal blood across the placenta

Home and Workplace Safety - . 1. what is the fatal injury caused by electricity entering the body and destroying vital

Neonatal/Pediatric Cardiopulmonary Care - . resuscitation. when to resuscitate. need usually related combination of can

Ch. 26-Water Emergencies - . vocabulary. near-drowning - survival, at least temporarily, of near suffocation due to

Pediatric Neck Masses - Background. in adults, 80% of neck masses are neoplastic and 80% of these are malignantversus in