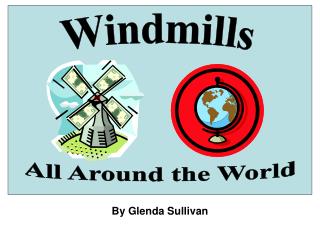 What a Wonderful World... - What a wonderful world. cherry blossoms in japan. niagara falls, ontario. tundra. autumn in

Windmills, Barbed Wire and Trains - . which mattered most?. the farmers and the

funnybytes - Quotes by henry van dyke. sound on please windmills of your mind henri mancini. www.funnybytes.net. use your

Location : where are windmills being built? - . made by : anke visscher &amp; julia stindt. researchquestion : what

Hej alla! ¡Hola a todos! - . my name is ainhoa baucells domínguez i am 22 years old this is me. i am from spain and i

THE WINDMILLS OF CAMPOS - . the windmills of

Bisphenol A Demand to Grow, Owing to Increasing Applications of Epoxy Resins and Polycarbonates in Automotive and

Abandoned Wells Do you have an old well in your yard? - . problems. contamination can directly contaminate groundwater

Holland - . class 14. holland is located between belgium and germany. it is famous for windmills. we made our own

WIND AND WINDMILLS - . windmill. the windmill speed determine the wind power and