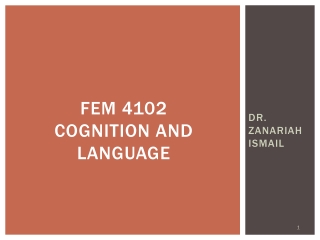 Language and Cognition - “the words of language, as they are written or spoken, do not seem to play any role in my

Cognition and Language Characteristics - . chapter 3. levels of intelligence. iq levels of students with ld range from

Memory, Cognition, and Language - . test review. because it has all of the features commonly associated with the concept

Language, Cognition and Cognitive Mastery - . logic and reasoning. logic is the science of thinking – although 2 people

Language and Cognition Colombo 2011 - . psycholinguistic assessments of language processing in aphasia - writing with