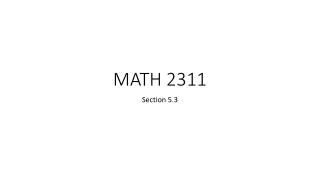 MATH 2311. Section 5.3. Regression Lines. A regression line is a line that describes the relationship between the explanatory variable x and the response variable y . Regression lines can be used to predict a value for y given a value of x. 2311: Algorithmic Architecture Basics of Algorithms Data IO - . data input/output. email i received. is there a way to

Math - . trivia. trivia. this game of trivia is a game of knowledge and haste. teams. each round has 5 questions: 30