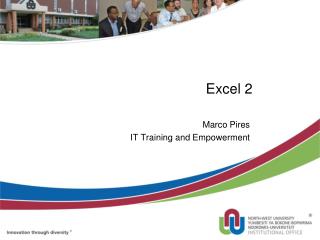 Excel 2. Marco Pires IT Training and Empowerment. Formulas. Writing Excel formulas is a little different than the way it is done in math class. Excel formulas starts with the equal sign ( = ) rather than ending with it. EXCEL 2 - . types of information can be typed in a cell text numbers formulas functions text is also known as labels

Excel – Study Guide #2 - . spreadsheet terms. input collection of information data to be typed into the spreadsheet.