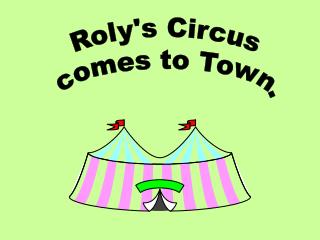 Roly's Circus comes to Town. “Roll up! Roll up!” shouted Roly the ringmaster. “Come to the best circus in town. We’ve got so much to see; crazy clowns, perky penguins, elegant elephants, dancing horses and lots lots more.”. Circus comes to town - The traveling cole brothers circus of the stars aims to bring the circus to rural areas. the

The Circus leaves town - This week, the ringling bros. and barnum & bailey circus performed for the last time in new

WHEN GOD COMES TO TOWN - . changing our city. mark 馬可福音 marcos 16:15 go into the world and preach the good news

When Zachary Beaver Comes to Town - . folders. on your folder, you will write/draw the following: -first and last name

When the Circus Came To Town Vocabulary ~ Lesson 7 - . fret to think about something a lot, or to worry. proclaim to

When the Circus Came To Town Vocabulary ~ Lesson 7 - . fret to think about something a lot, or to worry. proclaim to

CIRCUS - . +. the tent is called a big top. the circus is inside the big top. so many children &amp; adults go to the

Welcome to the Circus! - . a step by step process to making your own google site for the new northern potter website!.

The Circus - . come to the circus. it opens at 6 o’clock. come along and see the clowns. sean. here is the juggler. he

Idea Circus - . a pre-conference presentation by the arizona state library, archives and public records, a division of

Circus Maximus - . sari goldstein. background. between the palatine and aventine hills could seat up to 250,000 people