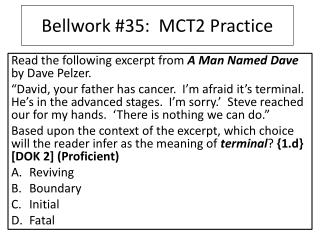 Bellwork #35: MCT2 Practice. Read the following excerpt from A Man Named Dave by Dave Pelzer. “David, your father has cancer. I’m afraid it’s terminal. He’s in the advanced stages. I’m sorry.’ Steve reached our for my hands. ‘There is nothing we can do.” A Storm in the Night - . by mary stolz illustrated by pat cummings. objectives:. you will: practice recognizing compound

Practice - . you collect data from 53 females and find the correlation between candy and depression is -.40. determine if

Maintaining competence - . dr leena al- qasem. all countries need to ensure that the practice of medicine is ethical and

If We Want More Evidence-based Practice, We Need More Practice-Based Evidence - The shifting context for dissemination