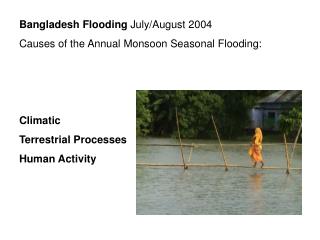 Bangladesh - . bangladesh? where is it?. bangladesh map. with a population of 120 million people packed into a land mass

Environmental Interdependence - . coexisting in an ecosystem. plant-herbivore interaction. a relationship between plants

Causes, Effects and Responses to the 1998 Floods in Bangladesh. By: Christina McConney MYP1 - . what are the physical

Infrastructure Of Bangladesh - . by kartika, soo jeong, keshiya, and danish. background of bangladesh . bangladesh is a

Bangladesh - . bangladesh is one of the world's most densely populated countries, with its people crammed into a delta of

Flooding - . causes &amp; effects. in england, the most common forms of floods are : • river flooding that occurs

Causes , Effects and Responses to the 1998 Floods in Bangladesh. By: Christina McConney MYP1 - . what are the physical

Bellwork - Front of Books - . starter: sketch the map below with a pencil and label the countries. please borrow a

ENECON In Bangladesh - . every success stands on some failure. enecon business started in bangladesh from january 2010.

QBE Insurance Group Flooding Information - . flooding. it is the inevitable disaster and one of nature’s worst. each