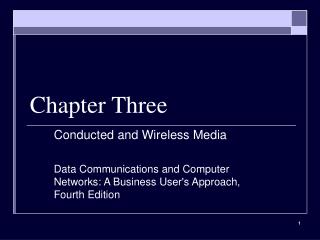 Chapter Three. Conducted and Wireless Media Data Communications and Computer Networks: A Business User's Approach, Fourth Edition. After reading this chapter, you should be able to:. Outline the characteristics of twisted pair wire, including the advantages and disadvantages