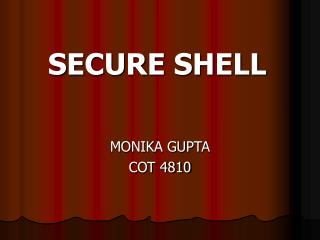 Secure Shell - . usually referred to as ssh, the name refers to both a program and a protocol. the program ssh is one of

Secure Shell Client - . ssh program allows you to:. access another computer over a network execute commands on a remote

Web File Management with SSH Secure Shell 3.2.3 - Click here to go to the table of contents. click here to leave the