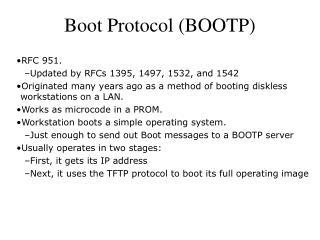 Boot Protocol (BOOTP). RFC 951. Updated by RFCs 1395, 1497, 1532, and 1542 Originated many years ago as a method of booting diskless workstations on a LAN. Works as microcode in a PROM. Workstation boots a simple operating system. Just enough to send out Boot messages to a BOOTP server Lesson 32. Dynamic Host Configuration Protocol (DHCP) - . objectives. at the end of this presentation, you will be able

History - . dhcp was first defined as a standards track protocol in rfc 1531 in october 1993, as an extension to the

Chapter 16 - . host configuration: bootp and dhcp. objectives. upon completion you will be able to:. know the types of

Lecture 8 - . host configuration: bootp and dhcp. objectives. upon completion you will be able to:. know the