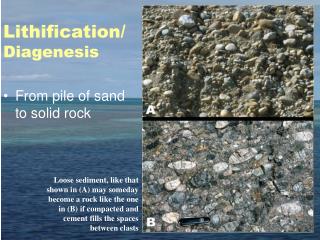 Lithification/ Diagenesis. From pile of sand to solid rock. Loose sediment, like that shown in (A) may someday become a rock like the one in (B) if compacted and cement fills the spaces between clasts. Diagenesis: How Sediment Becomes Rock. Chapter 7 – Sedimentary Environments - . sedimentary rocks are composed of sediment. . sediment forms at or near

Diagenesis , Catagenesis and Petroleum; The Carbon Cycle - . lecture 50 . diagenesis. diagenesis in the context of

The Limits of Metamorphism - . low-temperature limit grades into diagenesis the boundary is somewhat arbitrary

Igneous Rocks - . the rock cycle. the continuous and reversible processes that illustrates how one rock changes to

Sedimentary Rocks - . terminology . sedimentary rock - a rock formed through the deposition of sediments from weathering

Rock and Water - The rock and water program. developed in holland by freerk ykeemain response to the negative manner boys

Rock, Paper, Scissors - . a probability experiment. probability is a measurement of the chance or likelihood of an event