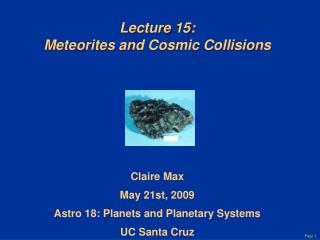 Lecture 15: Meteorites and Cosmic Collisions. Claire Max May 21st, 2009 Astro 18: Planets and Planetary Systems UC Santa Cruz. Practicalities. During Break: Take a look at our meteorites Next Tuesday May 26: Come to class with your project groups, work on projects together Heavy Ion Phenomenlogy and Hydrodynamic Models - . hydrodynamic models of heavy-ion collisions are only useful to the

Chapter 12 Remnants of Rock and Ice - . asteroids, comets, and the kuiper belt. 12.1 asteroids and meteorites. our goals

COSMIC: Constellation Observing System for Meteorology, Ionosphere and Climate - . status and results with emphasis on

Full Jet Reconstruction in Heavy Ion Collisions - . sevil salur. charge for this talk:. update on the latest results on

Elastic and Inelastic Collisions - . conservation of momentum. if a system is isolated (no external forces) and a

A First Look at the Performance for Pb-Pb and p- Pb collisions in FCC- hh - . michaela schaumann (cern, rwth aachen) in